How long since you have seen the Sun rise?

There is almost nothing better than waking before dawn, in the crisp twilight, chucking on the board shorts and heading down to the beach.  No one else was stirring, all sleeping in, no school or work today.

Yallingup is about 5 min away from the Chalet by car. One day they will put a bike path through…

Just about all of the drive there is through beautiful National Park and one has to keep the eyes peeled for kangaroos. Being February now there are a lot of joeys with their mums. The older joeys try to get into mums pouch and end up leaving a leg or two hanging out- most untidy…

Slowing down as I approach Andy’s store I can see the front door open and a few crew with coffees discussing waves no doubt. Round the corner past Caves House and on to my most favorite bit of road in the world.

If you haven’t been on this road there is an amazing contrast between the dark grey of the road, the light grey of the windswept tea-trees, the green of their foliage and the deep blue of the sky. The sign says 60 but this is way to fast for the vista..Rolling on, just past a small car park, just over  the crest of the hill I see the ocean. Every day her colour and texture different.  Adding to that the first rays of the Sun pushing over the hill to my right. Going to be just in time.

The Sun is probably up now on the East side of the Cape, but the West side, the Yallingup side, there is still a pre-dawn feel.

Park the car and step onto wet grass. A pair of back packers firing up the BBQ, a father and daughter waxing up their boards, a few women laying yoga mats out…

Past more iconic tea-trees. Climbed them as a kid. My kids climbed on they yesterday, and hopefully their kids one day.

Down the steps past a few old boys washing the salt off after their morning swim.

And then onto the cold sand toward the sea.

The tide is out, the lagoon a silk sheet punctuated by small waves from beyond the reef. Someone on a stand up board. Could have been me…oh well..

It takes maybe 20 minutes to walk along the beach northward toward the rocky bit. As the Sun is getting higher the colours of the hill become more enhanced, the sky becoming azure, the sea, that blue – well I have never been able to describe what it is actually like.

Turning around and heading back now the decision is between a swim or a coffee or both..

Probably can squeeze in both before returning and seeing if anyone is awake. 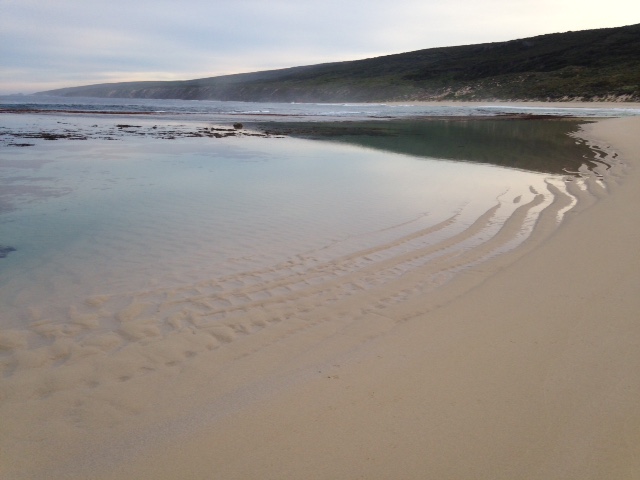