Sea Breeze Chalets were completed in August 2015. whilst in the construction phase we were very conscious about keeping the house vermin proof. as field mice, possums and even foxes and feral cats all inhabit the surrounding forest, we attempted to make the house animal proof.
Well, unfortunately we missed a few spots..
Luckily we closed up all of the possum sized holes. Other homes in the area have had ongoing possum problems for years, and we have managed to avoid late night thumping in the ceilings, stains on the ceilings and bad smalls in the roof space.
Unfortunately we missed a hole about the size of a 20 cent piece…
One night, whilst we were on the verandah having a bbq, we noticed what at first appeared to be a mouse walking down a verandah post. Its body was about 3″ long, light brown in colour, beautiful little nose and an amazing tail. on the tail was what looked like a bottle brush flower- but black in colour.
It stopped half way down the post, looked at us then continued casually walking down the post, onto the verandah and jumped about 6′ to the ground, skipped across the grass and climbed up a peppermint tree.

So, after doing a bit of research, we found that it is a phascogale or Phascogale tapoatafa.
Wiki describes them as a rat sized arboreal carnivorous marsupial characterized by a tuft of black silky hairs on the terminal portion of its tail. Males of this species do not live past the age of one, as they die after reproducing….
Breeding occurs between June and August and the male dies from stress related diseases brought on by the energy expended in the bout of frenzied mating. Females nest in hollow trees bearing litters of 7-8 young which stay in the nest to the age of 5 months.

The species is considered to be threatened or very vulnerable to localised extinction. Because of this we have decided to let Mrs Phasco keep her lodgings until late January when all the kids have moved out.
We have been kindly given a possum box that will be shortly placed into one of the old peppermints nearby. The entry hole will be reduced down to about 2″ diameter so possums can’t get in. We have also been told to cut slots into the sides so feral bees don’t move in.

What we have noticed is that she is very quiet. She wakes up about an hour after Sunset, squeezes out of the small opening, climbs along a verandah rafter, down a post and away for the evening. She returns about an hour before dawn, does a lap of the ceiling and then goes to sleep. No guests have said anything about strange noises in the roof yet, so hopefully till the kids are all gone she will stay! 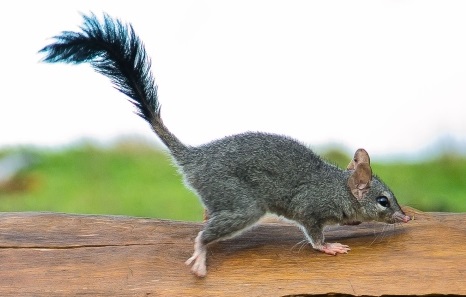 some great Phascogale pictures are here

Update March 2017. Looks like she has moved out, so we have closed up her access and stuck a possum box in a nearby tree with an opening the size of a 50 cent coin- large enough for her, but not the possums!